This week, we have a change of pace where the boys get out of the studio and out into the sun for a day of sporting events. To no one’s surprise, part-time-idol/part-time-athlete BTOB’s Minhyuk shines (literally); iKON are, well, still iKON; and everyone has fun cheering Changmin on! 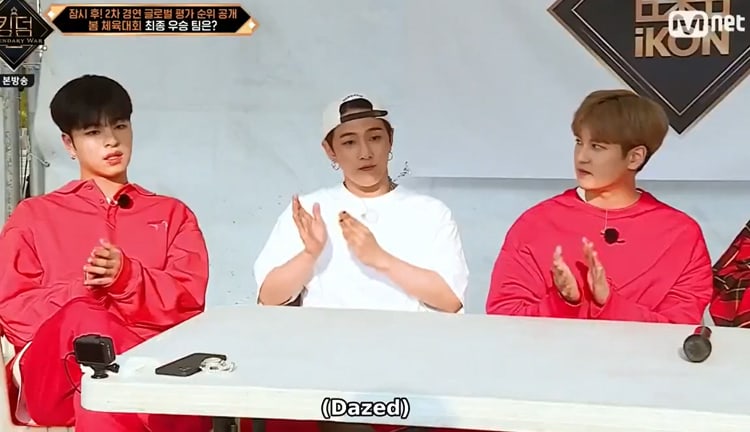 Spoiler warning: Rankings for round 2 are listed towards the end of the article.

But before we get to the actual vitamin D infused track meet, the show continues on from last week by announcing the theme for round 3, which is “No Limit.” Unlike the previous two rounds, there will be two parts to this third round. In part 1, the six groups will be separated into two larger teams. ATEEZ, after placing first in the previous round, was given the choice to select their groups, and they chose Stray Kids and BTOB, which means iKON, SF9, and THE BOYZ automatically form the other team. These larger groups will break off into smaller units — vocal, rap, dance/performance — and face off with each other. Basically, all that just means that we’ll be in collaboration nation, and I’m already buzzing with excitement.

For part 2, the boys will be back in their OG groups, and they’ll deliver a performance with no limits whatsoever. (THE BOYZ is already attempting to court MC Changmin). The voting for this part will revert to how it was before, with one tiny change being that the groups will only have two votes instead of three.

How high can you jump?

Now, onto KTM — Kingdom Track Meet! (Brought to you by one very buzzed Kevin from THE BOYZ).

There were three events altogether, and they were MCed by TVXQ’s Changmin as well as a rotating panel of group representatives. The groups were split according to the round 3 teams, with team Mayfly consisting of ATEEZ, Stray Kids, and BTOB, whereas team The-i-9 consist of THE BOYZ, iKON, and SF9.

The first event was vaulting, and to start them off was none other than SF9 (who are looking fine in their white tops and jeans combo). They took advantage of their natural tall statures, and the majority of their members vaulted their way into the next round.

When it was Stray Kids’ turn, Changbin, who was an MC at the time, made sure to let everyone know he had no faith in his group’s abilities. And true to his words, while other groups got the vaulting montage, Stray Kids hilariously got the caught-on-the-vault-montage. 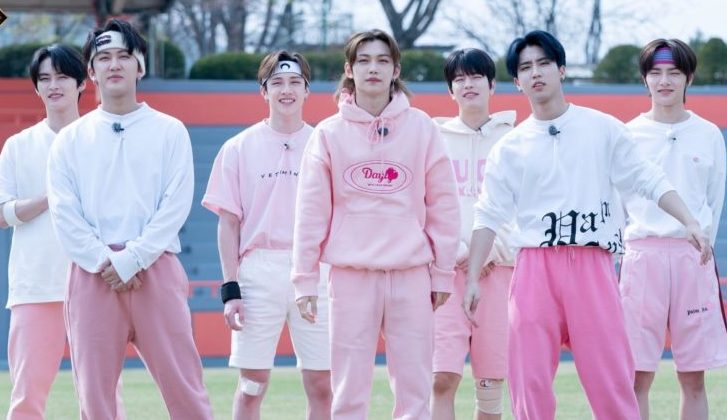 I present to you, Strawberry Kids! 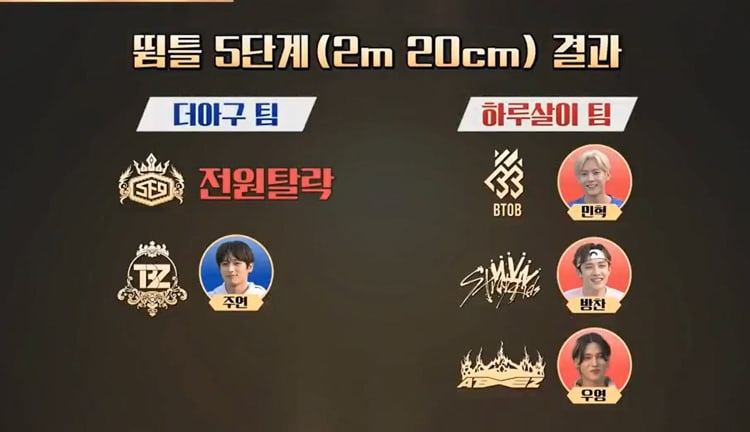 Short of the final: THE BOYZ’s Juyeon and ATEEZ’s Wooyoung were doing great too!

In the end, it was vaulting idol Minhyuk and Stray Kids’ Bang Chan who faced off in the final round at 2m 40 centimeter. But alas, both got caught on the vault and were thus tied for the previous tier. 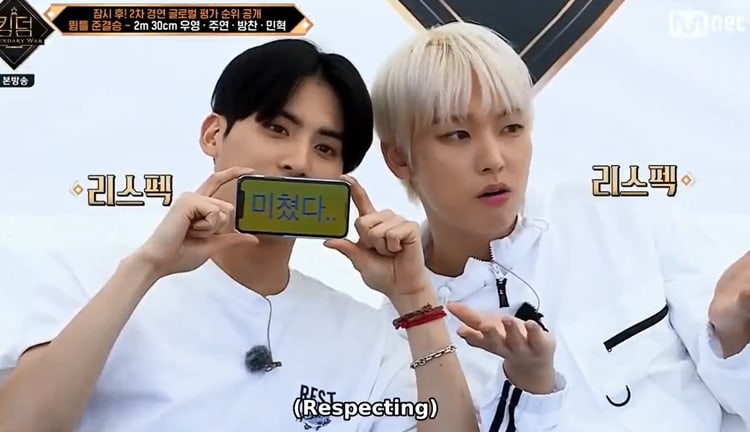 SF9 back at it with their scene-stealing antics!

What’s a sports day without some finger lickin’ KFC? Oh, you mean it’s KF4 and not KFC? Okay never mind. (Granted, lunch for the boys was fried chicken).

As an interlude, everyone was asked to vote for the visuals of Kingdom, officially dubbed Kingdom F4.

Coming in fourth was a tie between BTOB’s Eunkwang and THE BOYZ’s Hyunjae, both with three votes each (out of 41 in total). In third place was THE BOYZ’s Sunwoo with four votes; in second place was Stray Kids’ Felix with five votes, and in first place was Minhyuk with seven votes. 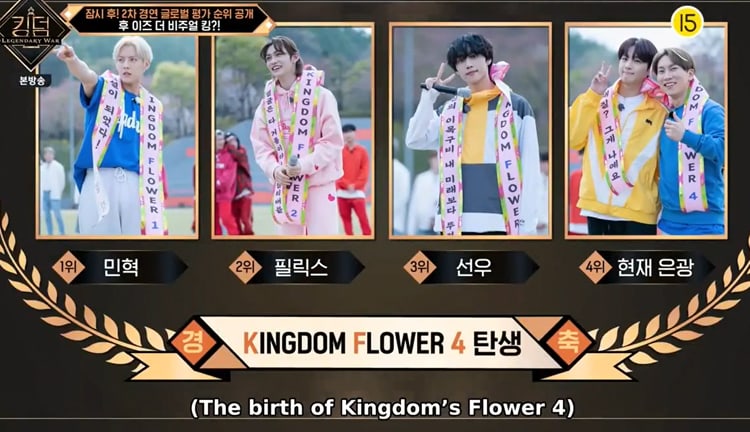 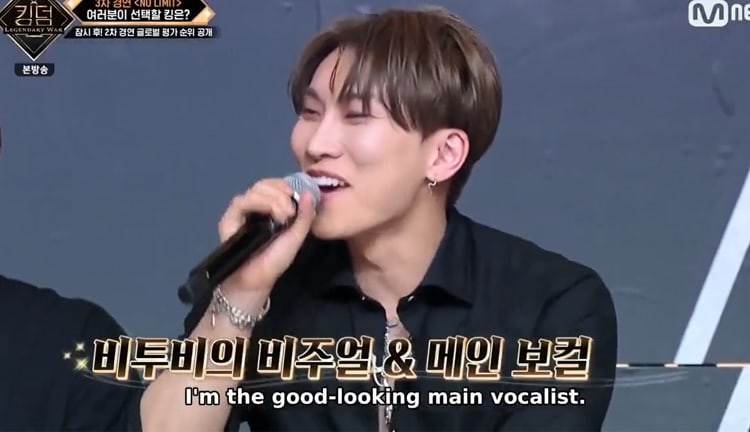 The prize for coming in first was a CG glowing effect that was applied to visual king Minhyuk whenever he was on screen for the rest of the episode. And really, while there were plenty of good-looking boys out on the field, we can all agree that Minhyuk was looking super fine that day, no? 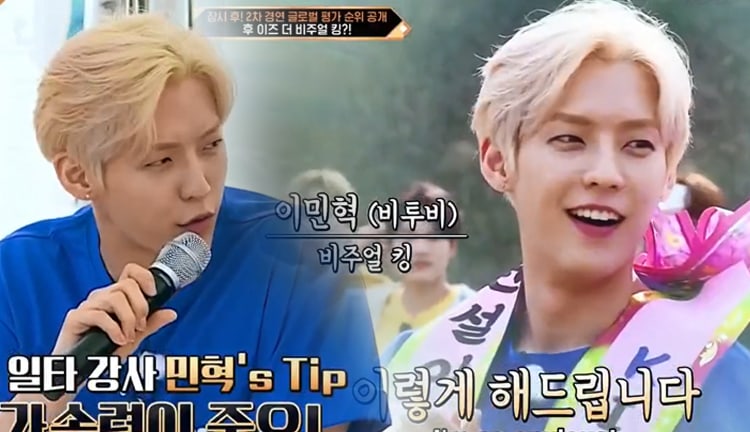 How firmly can you hold on?

The second event was “catch the tail” but with balloons. The teams each sent out eight members to form a chain, where the “head” of one team goes after the “tail” of the other. It was pretty amusing watching the teams run around in circles, and iKON’s Bobby looked especially entertained whenever his members couldn’t hold on to the person in front and were flung around. 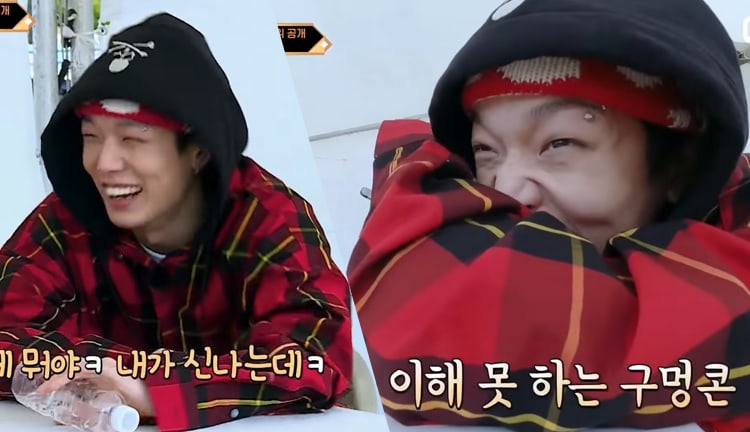 After a 1-1 score, team Mayfly eventually emerged victorious by winning the tiebreaker set.

How fast can you run?

The third and final event was a relay race where each group sent out four members (with Minhyuk running twice for BTOB because Changsub was still out).

In the relay, BTOB managed to take the lead from SF9 and stayed in front of the pack for the most part. Unfortunately, Eunkwang took a tumble before he was able to hand the baton off to Minhyuk in the last leg and that cost them their lead. ZZZ immediately overtook them, with ATEEZ’s Wooyoung (who was crushing all the events by the way) zooming in for the win, and Bang Chan and THE BOYZ’s Sangyeon respectively coming in second and third. 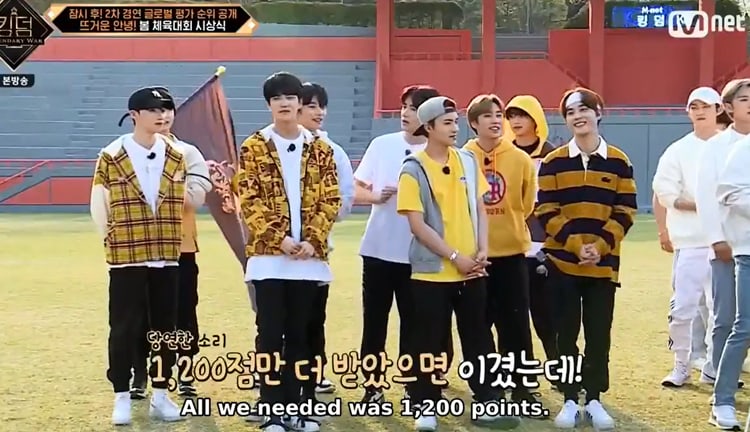 It was fun to see the boys let loose especially since we’ve mostly seen their more serious sides (and it’s nice to see them without “cuts and bruises” on their faces for one week too). They also got the chance to mingle with each other, which will be important since they’ll need to work together for this next round. And from the sneak peek, it already promises to be a doozy! 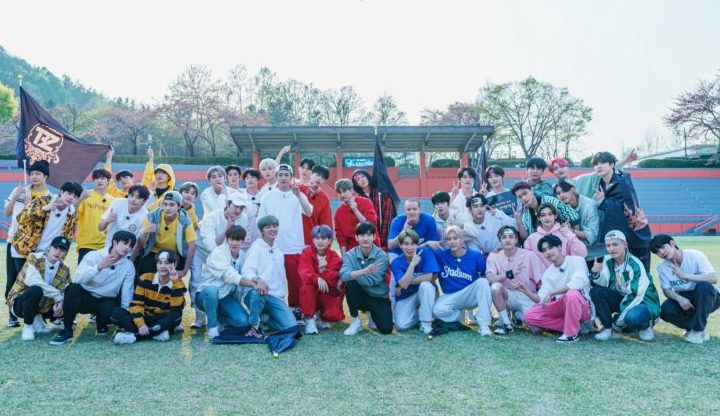 Which team were you rooting for in the sports meet? And which unit team-up are you looking forward to the most? Let us know in the comments below.

Belinda_C can’t wait for the explosive stages next week.

How does this article make you feel?

The Deadly Elitism of the Time’s Up Charity

The Time's Up Foundation-- the star-studded not-for-profit cooked up and bankrolled by power gamers in politics and media at the height of...

The young woman previously sought an abortion, but was far beyond Japan's legal cut-off point for terminating pregnancies. Photo: BEHROUZ...

image source, Getty Images Loved ones of people who died on 9/11 have read out victims' names, as the US marks 20 years considering that...

The Sept. 11 terror attacks on U.S. soil were felt by first responders watching the events unfold on their television screens in...